The episode of particular interest here offers a critique of the modern dating world, aptly titled “Love me Tinder”. It introduces 40-year-old James Rhine, a self-confessed Lothario of dating apps, and shows him in his element, swiping to his heart’s content on popular apps for meeting new people – Tinder, Bumble, and the like. The documentary-makers follow the way he navigates through the dating scene, taking 20-something-year-olds out, while the woman he had been dating for two months is left waiting for a reply. She becomes the victim of a ‘ghosting’.

To ‘be ghosted’ is to be dropped, ignored, and not replied to. It is increasingly used as a way of breaking it off with a romantic partner without the drama of actually ending the relationship. Rhine justifies this behaviour through his quick change of interest and ability to easily find a replacement for her, without a face-to-face confrontation to remind him of her existence.

During the introductory comments to the series’ 2nd episode, one interviewee notes how dating apps effect the way in which people are taken seriously, and are not shown respect as human beings: “It takes the humanity away from people a little bit. You’re on a phone. You know, you’re quantified. You’re a thing.” As a non-person person, this makes it easier for ghosting to take place, providing distance between the two right-swipers. Subconsciously the ghoster may not even consider the ghostee to be a real human with feelings and emotions, but rather someone who can quickly be replaced and from whom they can easily move on. The lack of guilt and remorse is tackled in “Love Me Tinder” when the woman who Rhine has ghosted gets a chance to confront him about his actions. He comes to the realisation that his actions are below-par, but only after having seen the aftereffects of pretending she didn’t exist.

The episode acts as a reminder that the way we use technology to interact is real, and can hurt others. Alexis, who dates Rhine briefly, tells her mum that we are “a socially inept generation”. With the next right-swipe, successful ‘match’ and hook-up at our fingertips, this is hardly a surprising social evolution, and one in which we must at least attempt to ‘swipe right’ on our humanity as well. 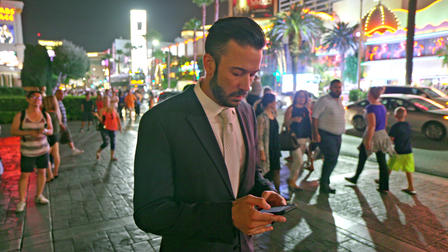 Scottish cinephile & feminist; based in Toronto, Canada View all posts by debbiewritesreviewshere